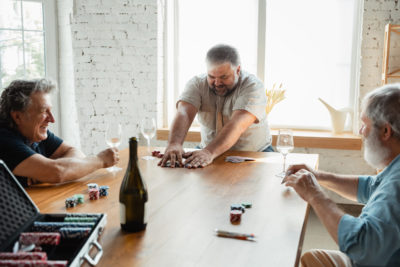 There’s lots of different ways to exploit weak players at the poker table. Most of it is through post-flop skill but a key part of beating weak players is getting them heads up. It helps your chances of winning the pot there and then, and you also have better chance of making the best hand when you’re facing just one instead of taking the hand multi-way. In this article, we will explore what iso-raising in poker is, why it’s done and how to do it effectively from different positions.

What does ISO mean in poker?

An iso-raise or isolation raise is where you raise pre-flop, typically over a limper. The raise is intended to “isolate” that opponent and take the flop heads up, or win it without contest pre-flop. It is a move routinely used by winning players at most stakes in cash games and tournaments too.

Who should we iso raise against?

The iso-raise is something you want to do against weak passive players. You know the type…. The players at the table that like to play more than ½ their hands and are quite happy playing limp in poker. They are playing to hit hands and hope to win big. Each hand they are dealt is like a new lottery ticket and like the lottery, you can make their chances of winning very slim. By isolating these players heads up, you can take control of the pot and be the aggressor.

Controlled aggression is a good way of looking at it. Once you are in control of the pot, you are master of the pot size, whether you are taking free cards, value betting, bluffing and semi bluffing. It’s a great position to be in and it’s why you will see professionals frequently trying to iso-raise a weak player in a pot.

Not all weak players are passive limpers. Many have a distorted view of Texas Hold’em that is likely brought on by watching YouTube clips of Phil Ivey or Tom Dwan. They think they can get away with playing lots of hands, playing aggressively and turning a big profit. It doesn’t occur to them that there’s probably 1 in 100 people that can adopt such a strategy successfully. As such, they will be losing most hands they contend. Full ring poker rarely rewards those who enter every pot, no matter how aggressive you think you can be.

An effective counter strategy to these bad LAGs is to 3 bet their opens. It serves the same point as isolating limpers but with obvious differences; the pot is bigger and your opponent is likely to be more stubborn or bluffy. The 3 bet iso raise is something you can only really employ in cash games or deep stacked tournaments. Otherwise, you will find yourself in massive pots very quickly and may be stacking off lighter than you hoped. The 3 bet iso-raise is something that has grew in popularity in recent years due to the increased aggression. It was not even an expression when I first played online poker.

Size matters…When it comes to poker, you need to have solid bet sizing strategy. You need to ask yourself is the size of your bet accomplishing what you want? If it is, well done! If it isn’t, take a look at your sizing and reconsider what you are doing. An iso-raise needs to get the pot one on one or win it outright. Given that someone has already entered the pot, you need to forget about small ball bet sizing as it won’t help you out. The table below is a guide to bet sizing for iso-raises. Please note it doesn’t take into account multiple limpers. To factor this in, just add an extra big blind per opponent in the pot.

Our sizing adjusts based on the position we iso-raising from. Iso-raising from early or middle position is not ideal as we have lots of players to act behind us. If you are going to raise over the limper from here, you should have strong hand. Four big blinds should be enough to dissuade callers yet doesn’t invest so much in case someone behind you has a premium hand.

Finally, you want to increase your raise from the blinds to 5 big blinds. This may seem large but in reality, you won’t be raising liberally from here. Secondly, a smaller raise won’t accomplish anything. Once one calls, the rest of the table find themselves calling with favourable odds. For this reason, we need to punish the limpers and charge more for the privilege of playing in position on us.

What hands should we ISO raise with?

You will want to iso-raise with all your strong hands from any position. You can throw in 2nd tier strong hands like king queen, ace ten and middle pocket pairs from middle position. From the cut-off and button, you can open your range significantly. Provided you are comfortable playing pots with less than premium hands, I recommend iso-raising with suited aces, suited and gapped connectors and even small pairs. Remember, the point of the raise is two fold; win it now or play the pot heads up against a weaker player with the aggression. If it does either, you’re on your way to winning poker.

Iso-raising is a great strategy but a raise on it’s own pre-flop won’t win the pot all the time. You need to navigate post-flop effectively otherwise there’s no point. In order to iso-raise profitably, you must have a solid grasp of continuation betting and pot control. You can’t just c-bet every flop and expect to win. We have a continuation bet course that can help you understand it properly. Click below for more information.