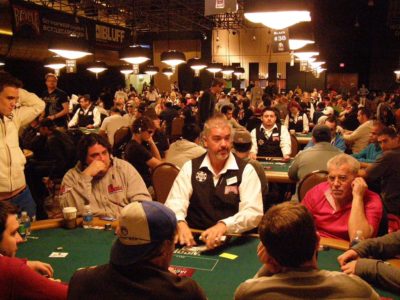 Few organizations have done more to boost the profile and popularity of poker than the World Series of Poker (WSOP). What started as a small, invitational tournament in 1970 has expanded and evolved into a series that last year featured 105 tournaments (90 in WSOP and 15 in WSOP Europe), thousands of players, and millions of dollars in prize money.

During the 50-year evolution of WSOP, the series has transformed players into superstars and millionaires. It has helped turn poker into a riveting spectator sport through television deals, and taken the professional game from the fringes and into the mainstream.

To achieve such sustained success and maintain their prominence in the face of the emergence of rival poker tours. WSOP has had to adapt: to its growing influence; to television demands; to poker’s changing landscape; and most importantly, to technology.

That continued ability to adapt, particularly to technological changes, has most recently been demonstrated by the announcement that the 2020 WSOP will, for the first time, be played online.

The new ‘WSOP Online 2020’ must not be confused with ‘WSOP Online Poker’, which is an entirely different series of poker competitions under the WSOP banner.

With the usual World Series of Poker – initially scheduled to run from the end of May to middle of July – postponed because of the coronavirus pandemic, the launch of ‘WSOP Online 2020’ will fill that void and make the series its most inclusive one yet.

Starting on July 1 and spanning more than two months until the final event on September 6, WSOP Online will see players North American players based in Nevada and New Jersey compete for large cash prizes and daily bracelets. While international players will join the action from July 19 on the GGPoker Network platform.

“It wouldn’t be summer without WSOP , ” said Ty Stewart, Executive Director of the World Series of Poker. “While we are thrilled to be reopening our venues and optimistic about future offline events, we couldn’t be more excited about deepening our relationship with GGPoker and watching some history unfold online this summer.”

While regular events will undoubtedly return in the future, there are certainly no guarantees that the 2020 WSOP will take place. The launch of the Online series is, at this stage, almost a necessity; a temporary solution to a current problem.

Look at the Future?

But yet, could this launch of what is expected to be “ largest online tournament series of all time ” also offer a glimpse of the future of competitive, professional poker?

Offering an online version to players is a luxury that poker as a game has compared to other sports and competitive events. Just look at the complications facing major sport around the world during the pandemic. Soccer leagues face numerous issues trying to complete or start seasons; the NBA is re-locating to Florida for a 22-team mini league; and horse racing has had to postpone and completely reschedule its calendar.

While soccer is gradually returning to the pitch, basketball gets back on court, and a new horse will soon add its name to the Kentucky derby winners list, which you can read here in Twinspires.com. It has all proved to be a logistical nightmare after shutdowns that have also caused untold financial damage.

Poker and the WSOP do not have quite the same problems to contend with. Online poker is already immensely popular. While it differs in many ways to the table version, it is a capable substitute, for both players and fans, in the context of the current climate.

“There’s nothing in the world like winning a WSOP bracelet,” said GGPoker ambassador, Daniel Negreanu , who is also one of the great poker players in history. “Bringing this experience online will open the door for a new generation of poker players to feel the rush of competing for the game’s biggest prize.”

By opening up the game online to an increasing number of players, it will only serve to strengthen WSOP. It will provide a platform for even more talented poker stars around the world to make their mark. If WSOP Online can unearth the next poker superstar who perhaps otherwise would have been denied the opportunity, it will only benefit the WSOP brand.

Additionally, the incredible rise of esports has revealed an enormous interest in online spectator competitions and there is no reason why WSOP Online cannot claim a piece of that pie.

Perhaps, then, WSOP are viewing this online series a potential blueprint for future tournaments. Not to replace the traditional table games long-term, but as another extension to their operation.

So, while WSOP Online was a reaction to the pandemic, it could well prove a coincidental blessing. After all, an ability to adapt and evolve has served WSOP well over the past half of a century: why stop now?