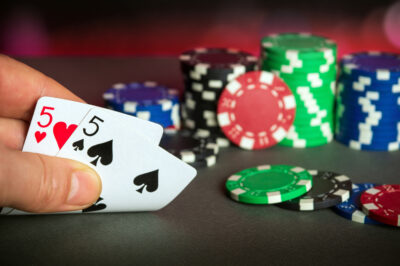 One of the most visually satisfying hands to be deal in Texas Hold’em is a pair. You’re holding a hand that is already has value as a made hand and can improve post-flop. However, beginners and even experienced players occasionally struggle to play these profitably. In this article we’re going to offer some basic tips on how to play different pairs and also advise what not to do, so you can generate better results with them in the future.

The big pocket pairs are A-A, K-K, Q-Q and J-J. These are the best possible starting hands in Texas Hold’em and must be raised and 3-bet and even 4-bet in most spots. You’ll want to raise or re-raise with them to narrow the playing field, protect your hand get more value. The big pocket pairs perform better in heads up pots where your odds of winning are much better. You don’t want to play multi-way pots with big pairs as you’re running an increased risk of getting outdrawn.

The common pitfall among weaker opponents is they limp or 3-bet too small then lose a big pot when someone makes a two pair or better hand. There are occasions when setting a trap with a big pocket pair can be ok. After all, the occasional cold call will balance your range and keep your less exploitable but for the most part, play these hands fast and aggressive.

DO: Play them aggressively before the flop and post-flop in heads up scenarios.
DON’T: Slow play them multi-way as you will get sucked out on frequently.

The medium pocket pairs are 10-10,9-9, 8-8, 7-7 and 6-6. Naturally, the lower down the pocket pair, the less value it has. It’s hard to play some of the smaller pairs for value post-flop as the lower you get, the more overcards and increased chance of someone beating you. That’s not to say medium pocket pairs aren’t valuable. A hand like pocket tens or nines can sometimes be an overpair and even sevens might be a 2nd pair type hand post-flop.

The trick with medium pairs is to attempt to manipulate the pot the way you want and also assess the context of the scenario before investing too much chips or cash. A hand like nines performs much better against a LAG than a nit opening from under the gun.

You can profitably 3-bet medium pocket pairs when facing a late position open when in the blinds. You should also feel confident in blinds battles that your hand is best too. Overall, you should at least be flat calling with these hands to a raise as often you’re either 50-50 or better against players who are opening a good range of hands. Secondly, they can also hit the disguised set.

DO: Throw in some 3-bets with these hands from the blinds against late position raisers.
DON’T: Fold to a single raise in deep stacked games. Even against tight opponents you want to see flop with middle pairs.

Small pocket pairs look nice but rarely generate much money. You’ll find yourself either trying to stubbornly hold on against aggression or turning them into bluffs on later streets. For the most part, we suggest trying to get in cheap with 2-2,3-3,4-4 and 5-5. The goal is to flop a set and rake in a big pot against someone holding top pair or overpair.

For experienced players, we believe it is profitable to open from any seat at the table. For beginners, it may be best dumping small pocket pairs from the early positions. You’ll find yourself in many awkward spots post-flop and unless you’re experienced at knowing when to continuation bet or not, you will probably lose money. It’s best to set mine with these hands and fold to any aggression if you miss the flop.

DO: Play these hands multi-way as you can get handsome pay off against fishy opponents.
DON’T: Call raises in tournaments unless you and your opponent are sitting with 50 BBs or more.