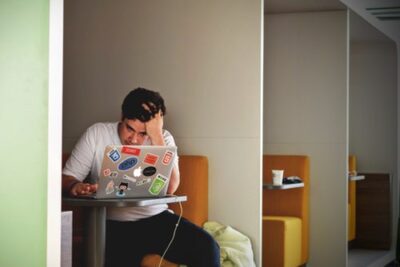 What is a Bad Beat in Poker?

A bad beat is the term given for a situation in poker when a player with a much stronger hand, and in a mathematically favourable position nevertheless loses. It typically occurs with an unlikely turn or river card.

A bad beat is usually associated with the idea that the player who got lucky made a bad call or play that should have been avoided. This is not always the case. A bad beat is often incorrectly referred to, when in fact the situation is a “cooler”, two incredibly strong hands battling.

For example, if player A has A-A and player B has K-K and they both move all in on a A-K-K board, that is not a bad beat as much as it is a cooler or cold deck. After all, player B is not playing poorly by playing the K-K is he?

How to Handle a Bad Beat

One of the differences between strong, winning players and weak, losing players is in their ability to handle bad luck and bad beats. A strong player will move on to the next hand and not let a bad beat effect their play. They will continue to play their normal game.

The opposite is true for a mentally weak poker player. They will often go on tilt and play poorly for a while, perhaps the entire session. They will fixate on the hand that they lost. A mentally soft player will complain and moan to other poker players at the table.

Don’t pull your hair out or let a bad beat effect your play. Try the tips below after you take a bad beat. You will have a better chance of continuing to play well.

Go For a Walk

Sometimes it’s better not being at the table than staying and playing badly. Getting up and going for a short walk can centre you. It will also help you regain your focus so you are ready to play your A game. Having a walk is a great way to reset, relax and de-stress. Next time you’ve suffered a bad beat and worried it will ruin your session, go for a walk to calm down.

Remember, if you are losing to bad beats a lot it means you are getting your chips in favourably in the long run. It stands to reason, that the good players will receive more bad beats. They are more likely to be getting their chips in mathematically strong positions. Take comfort from the fact that you are in this group and are doing something right. If you focus on the long run, you are less likely to get angry and play worse today.

Next time you take a bad beat, smile at your opponent. Remember, these are the people that are helping you make money.

Players sometimes mistake what a bad beat and occasionally they can be avoided altogether. We recommend reviewing the hands you thought you suffered misfortune and judge whether you made any mistakes. When you’ve analysed it and realised it was an error on your part, you can do something about it by studying poker and ridding yourself of that leak.

If it was just plain bad luck and you did nothing wrong, you can confidently move on, safe in the knowledge you played the hand well.

Unsure and want independent advice? Why not trial our hand history review service? Fill in the form below and we will be in touch with more information.

*This article was originally published in December 2019 and updated*