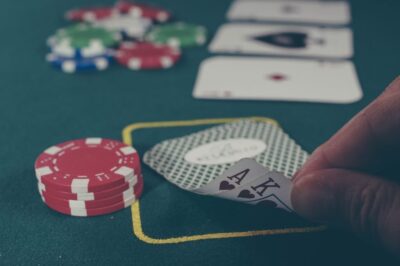 Known as “Big Slick”, Ace King is one of the strongest hands in Texas Holdem. This is a hand that many a player are unsure how to play, with most players prone to overplaying it. Whilst Ace King is unquestionably a premium starting hand, the context of the situation will determine its relative strength.

Looking at the maths, you are far more likely to be dealt Ace king then pocket aces or pocket kings. There are are more combinations of this hand than aces or kings. Ace king suited is better than an off suit ace king, represented by the fact that suited achieves 5-7% better equity than its off suit counterparts.

It’s also worth pointing out at that if your opponent has pocket aces or kings than you are a big underdog (unsurprisingly) with approximately 6% chance against aces and 30% against kings.

Context is Everything with Ace King

The situation should guide the way you play big slick. If stacks are shallow, its an amazing hand and you want to get your chips in with it. Tournament players will rarely fold A-K late in a tournament as stack sizes are rarely deep enough to warrant it. They understand that they are only doing badly against aces or kings.

Tournament players will happily take a coin flip, if necessary. Whilst this is a reasonable proposition when stacks are shallow or you are facing aggressive opponents, it’s not always the best mentality. This is particularly true if you consider yourself the best player at the table.

In an expensive and slow structured tournament, ace king’s value for committing you’re your stack before drops significantly. You are more likely to be up against kings or aces when strong players commit their tournament life. Obviously, this is player dependent but the reality is, strong tournament players are not committing their entire stacks lightly early in deep stack events (there are exceptions).

Early in a Tournament

If it’s early in a tournament or you are facing a tight player opening from early position, consider a more prudent approach to playing. Most beginner players see A-K and want to re raise regardless of the situation. This is a foolish way to play. Not only are you disregarding position, stack sizes, opponent and the value of deception, you are also giving away information to your opponents . You’re saying “I always re raise with ace king”.

Flat calling raises with A-K, particularly in heads up pots can be no bad thing. In situations when your opponent is dominated before the flop and would otherwise fold, you can often extract a lot of value.

Ultimately your ability and confidence in playing post flop poker will guide how you intend to play ace king. A strong and experienced player can vary his style and adopt flat calls and 3 bets as he sees fit. A novice should be more inclined to play straightforward poker, particularly at low stakes.

With under 75 BBs in a tournament against an opponent who isn’t a nit – you can safely commit your stack. It’s best if you you are getting the last bet in. If it’s more than 75 BBs and the player is tight or there are multiple raises, throw it away and move on to the next hand.

I hope you found this article on Ace King useful. If you are keen to learn more about how it can be played in tournaments or cash games, feel free to email us at info@texasholdemquestions.com.