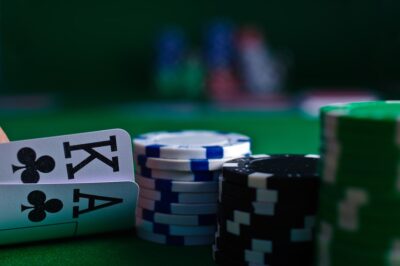 Gambling has been a part of human culture since the first human civilizations spawned. Dice have been discovered, for which many historians believe have been used for gambling purposes, which can be dated all the way back to Ancient Greece. Then, of course, there are the numerous records for chariot racing, which has been watched since much further back. Evidence also exists which points to the fact that the Romans would wager upon gladiatorial matches.

Unlike gambling, however, the casino as we know it today first came about in the 1600s. The first casino was built in Venice, and upon its successes, numerous others followed throughout the city, and later throughout the country. Today, the most popular game played in casinos is poker, with slots being close behind. Poker has been a staple of casinos for a long time, and in the modern era, thanks to the rapid advancements of computer technology, poker has become a game which can be played from the comfort of your very own home.

Thanks to the numerous casino sites, poker fans can access their favorite game (as well as a plethora of other casino games) from any electronic device. While online casinos are numerous and spawn with ever-increasing frequency, there are quite a few websites that rank the best of the best. For example, gambling sites reviewed by TheSportsDaily tend to be among the best out there.

The History of Poker

It may surprise people to know that poker is older than they suspect. It was first invented in the early 1800s in the United States of America. Close to two hundred years later, the game has become one of the most popular games in the world, comparable to chess or backgammon. It is played in casinos all over the United States, Europe, Asia, Australia, Africa and South America. It’s also played on countless online gambling sites, some of which are solely dedicated to the game.

The game first became popular nation-wide (in the United States) during the civil war, when it was played among soldiers from both sides. This was the time when multiple poker variants were introduced, such as the five-card variant (or stud as it is commonly called).

Let us now, take a look at some of these numerous poker variants which are popular around the world today.

The Variations of Poker

As stated, the game of poker has become so popular in the past 200 years, that numerous variants of the game developed around the world. Regional variants of the game developed in Asia, such as Chinese Poker and Chicago. Some regional variants, such as Texas Hold’em, have now grown to become quite popular. The following are a few of the most popular poker variants in the world right now.

Stud poker actually refers to a sub-group of poker variants, in which the players are dealt any number of cards (typically 5-7), with the goal of making the best possible hand using the cards they were dealt. This game pay no mind to positions. The players are dealt an alternative of face-up and face-down cards. The cards which are dealt face-down are often referred to as holes, which is where the term ace in the hole comes from. There are quite a number of variants on stud poker, the most popular of which is Six-card stud, Chicago, and 5-card draw.

Let’s first take a look at 7-Card Stud. In this variant of the game, each player is dealt 7 cards, three holes, and four face-up. The goal of the players is to use the seven cards which they’ve been dealt to produce the best possible hand of five cards.

Follow the Queen is a variation on 7-Card stud, which employs the use of a wild card. The standard rules of 7-card stud apply with one big addition. The exposed cards which follows a queen being flipped is considered a wild card. Naturally, the wild card rule does not apply if queens are not flipped.

Community poker refers to a game where players are dealt a number of hole cards, and the rest of the cards are placed face-up on the table. These face-up cards are referred to as “community cards”, and the reason for this is that all of the players can play off of them. The most popular poker variant played today is Texas Hold’em, which is a community variant of poker.