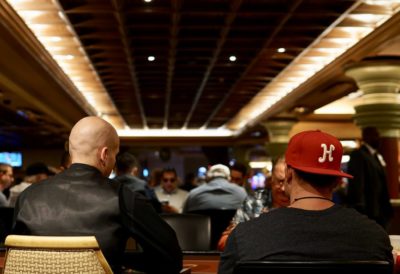 The first ever amateur poker player to win the World Series of Poker Main Event was Chris Moneymaker in 2003. The American qualified for the tournament through an online satellite and bested 838 other players to win $2.5 million. This moment is credited with kick-starting the online poker craze which boomed in the 2000s. It suddenly became clear that unknown poker players had a chance to win against the professionals and become a WSOP winner. In the modern age, a lot of poker players now learn the game online. They then take their skills to Las Vegas to compete for the ultimate prize. How can the average player replicate these people and have a chance of winning big?

Prior to Moneymaker’s success at the paramount poker competition in the world, it was almost exclusively for elite players. Regular tournament names included the likes of Stu Ungar, Johnny Chan, and Doyle Brunson. People with knowledge of the game could have a decent stab at predicting who the final table. But when Moneymaker made the world realise that it was possible for anyone to compete in the competition, it paved the way for a brand new type of player to emerge.

This began a trend where players would train for a lengthy period of time online before taking their skills to live games. Because people were playing at online poker rooms where they couldn’t see their opponents and try to read their behaviour, they had to rely on other techniques in order to increase their chances of winning. This brought about a new breed of poker players who could be considered mathematical geniuses.

The modern player needs to be able to quickly calculate their odds of winning based on the number of outs. At the same time, they are considering their pot odds in relation to how much they have already invested. They are also assessing theirs and their opponents’ stack sizes. There are many variables that need to be taken into account in every hand that some players have got the game down to an almost exact science.

Perhaps the best indicator that poker can now be played in a scientific way with strategy and methodology prevailing over luck is the fact that artificial intelligence has mastered the game. Pluribus, an AI machine designed by boffins at Carnegie Mellon University, recently managed to beat the likes of Darren Elias and Chris Ferguson in a game of six-hand poker.

Since the poker boom, a number of WSOP Main Event winners have been players who started off playing online before trying their hand against the pros in Vegas. One of the most recent examples of this type of player is Scott Blumstein. He came out on top against 7,220 other players in 2017 and took home $8.15 million. Prior to completing the ultimate endurance test and winning the world’s premier poker tournament over three days, Blumstein racked up a decent amount of earnings online during his college days.

Blumstein has almost $150,000 in online earnings. Most of which he gained from grafting regularly while studying for his accounting course at Temple University. It took some time to accrue this amount of money, and Blumstein cleverly opted to up the stakes as his bankroll increased. He managed to put himself into a position where the $10,000 buy-in to the WSOP made financial sense. He was well rewarded for his investment.

Is It Possible to Replicate Their Triumphs?

The great news for aspiring poker pros who want to take on the best in the business at the WSOP is the fact that anyone who is dedicated enough has the opportunity to follow in the footsteps of players like Moneymaker and Blumstein. Moneymaker was slightly more fortunate than the latter, as he won a competition for a place in the tournament. Blumstein took the approach of a number of professionals and steadily grew his bankroll while gaining vital experience at the same time.

Players who are serious about reaching the big time can use Legal Betting to find a list of the best online poker sites in 2020. This method means that players can find bonuses to get them started in the game. It can prove fruitful if they want to start building up their bankroll straight away by playing in low stakes tournaments.

Poker is a game which requires a lot of practice and patience. Players can play and watch training videos to improve. It also takes a lot of time to get to the top. The beauty is that anyone can win the WSOP Main Event if they put their mind to it. The best option would be to try to replicate Blumstein’s success. Become an expert online before entering the Vegas competition and you may be the next WSOP winner.

The featured image is from Chris Malinao Burgett/ @norestinthewild