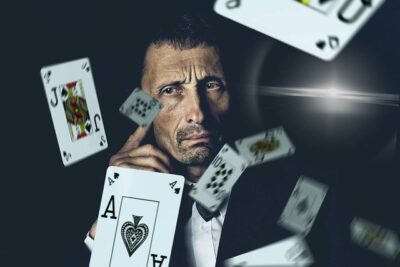 Anything that involves money interests’ other parties. I remember first playing live tournaments and being surprised when asked to trade percentages. I politely declined but it did make me think what motivates people give up potential earnings and get staked?

Poker staking is something that might be perfect for one and a disaster for another. It depends on several factors, which I will explore in this article. I hope by the end of it, you will have an understanding of what staking is and assess whether it’s for you.

What is Staking in Poker?

Staking is where someone else invests the cash for your tournament or cash game. In exchange, you will pay them a percentage of your winnings. This could be up to 50%. Most staking deals run for a number of months or hands. The player being staked usually has to pay back any losses before chopping up the winnings.

The Pros of Poker Staking

There are several benefits to being staked in games. There are three obvious perks that I can see though.

Playing poker without risk is very appealing to a lot of poker players. When you’re being staked, you are not financially invested. Regardless of your financial position, you won’t be impacted by a bad cash game session or tournament that you bubbled.

Playing poker without risk allows some people to play with more freedom. Not risking your own money also means you have free cash that you would have otherwise used for bankroll management.

A lot of staking arrangements involve some poker support through coaching or general advice and support. A lot of the time the person who is backing you will be playing higher stakes. As they have a vested interest in seeing you succeed, they will be available for support, discussion, feedback and potentially coaching too. Learning from an expert for free is an attractive by-product of getting staked. Some backers recommend the best poker software to use or the where to go for the best poker blogs. These are helpful ways for you to develop.

Most players who get staked are playing stakes they couldn’t afford on their own. That actually may be the sole reason why they are getting staked. Mike Matusow is one of the most famous faces in poker. When you see Mike playing big tournaments or high stakes poker, it’s usually because someone has staked him. This is a huge advantage to those who play smaller stakes or perhaps have poor bankroll management skills and need staking to play in bigger games.

The Cons of Poker Staking

Like most things, there are disadvantages and poker staking has some too. I feel obliged to inform you of some of these in this article.

The majority of staking arrangements involve an agreement between the backer and the person being staked. These is usually X number of hands or tournaments being played. This means you can’t walk away from a staking agreement easily. So, if you’re playing well and on a heater, winning lots of money, you have to see out your agreement with your backer regardless.

You may want to go it alone after 10,000 hands but if you’re contracted out to play 100,000, then your hands are tied. Good poker ethics dictate you should see out your contract, even if it means you are giving up a lot of your earnings.

Being able to play without personal risk sounds fine but if you find yourself on a bad run, you will start to feel the pressure. Nobody wants to lose money but when you’re losing money that isn’t even yours, it feels even worse. This is true for the vast majority of poker players I’ve come across. They almost feel guilty if they bust a tournament or lose a few buy-ins.

Pressure can manifest itself in your play. You may find yourself missing value bets, bluffing less frequently or making bad folds. If you don’t cope well with pressure, poker staking is unlikely to be right for you.

Makeup is embedded in practically every staking agreement. It is a way of ensuring the backer gets paid back any losses before their player can take some of the profit. For example, you’ve lost $500 in the first month, then win $700 on the second month. You are only entitled to $100 ($500 for the makeup, then the $200 split 50/50).

Makeup is a huge component of poker staking as it forces you to pay the backer his investment. It’s very difficult to get out of an agreement without paying them back. You either need to pay it back from your own money, quit playing or be released from your backer. As you can see, the freedom of staking is not so free after all.

You need to give it a lot of thought before entering into a staking contract. It’s not a decision to be taken lightly. There are great benefits but also some serious disadvantages too. Texas Hold’em Questions doesn’t offer any staking arrangements.

When we play, we want to win money for ourselves and not share it. We adopt this mentality in our coaching too, wanting you to win money for yourself. This is why we offer various methods of coaching for players with different needs. We offer 30 minutes free consultation to chat. You can book in a session by clicking below.

If you are interested in staking, do some research, speak with backers, find out their contracts and weigh up if it’s right for you.

Image by Thomas Wolter from Pixabay