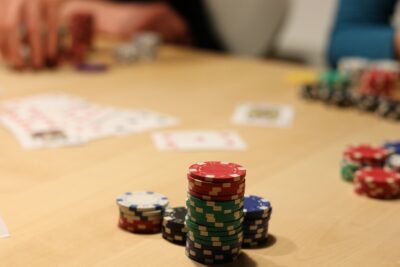 If you’ve ever picked up a history book or played Red Dead Redemption you’ll be aware of the origins of poker. The globally popular card game was born in 19th century America and has truly stood the test of time.

Since the games invention there have been a number of variant on gameplay, the most popular of which was developed in Robstown Texas in the early years of the 20th century.

Texas Hold ‘Em is widely regarded as the pinnacle of poker as it test players’ mathematical and psychological capabilities as well as their card skills. In this article we delve down into the history of the game in an attempt to understand how, and why it became the world’s most popular poker variant.

When poker was first played in 19th century America, players were dealt five cards which they could then bet on. As the betting progressed, players could swap cards from their hand with what remained of the deck.

The round would then conclude with a showdown in which the player with the best hand would win the pot. Whilst this variant was fairly fast-paced and accessible, it didn’t really reward skill and clever gameplay.

Nowadays this variant is considered so basic that it is rarely ever played in casinos and is usually limited to home games and video poker terminals.

So even in the early days of poker there was an obvious need for a more complex and nuanced variant. Texas Hold ‘Em was the answer that everyone was waiting for.

Texas Hold ‘Em starting hands were the first difference, with players only being dealt two cards. In addition to this, five community cards were dealt face up which players could use in conjunction with their cards to build a winning hand. Unlike the original variant of poker, Texas Hold ‘Em forced players to think explicitly about their opponents hands. A thorough understanding of the game was needed, along with a strong mental resolve as the concept of bluffing soon began to rise in popularity.

How Was Texas Hold ‘Em Received?

Initially many viewed Texas Hold ‘Em with suspicion and continued to play the original poker variant. Slowly but surely, the game did begin to grow in popularity and use, however that growth was mainly confined to the state of Texas.

For one reason or another, Texas Hold ‘Em seemed to be enjoyed only by Texans. That was until 1963 when a man with one of the most Texan names in history – Corky McCorquodale – introduced the game to the gambling Mecca of Las Vegas.

For the better part of a decade the Golden Nugget casino was the only place to play Texas Hold ‘Em in Las Vegas. When large crowds started turning up at the Nugget, other casinos cottoned onto the popularity of the variant and began offering it to their own customers.

The biggest moment in the history of Texas Hold ‘Em would come in 1970, when it was adopted as the official variant of the inaugural World Series of Poker, which it has remained as ever since.

This exposure catapulted the variant into the limelight and it soon became the most well-known and played poker variant throughout the world.

How To Play Texas Hold ‘Em

Like all variants of poker, Texas Hold ‘Em is based on the original card combinations with a pair beating a high card and a straight beating a three of a kind and so on. The community style of Texas Hold ‘Em, in which five cards are publically placed on the table, allows you ample chances to build a winning hand.

However, a good hand is not always a guarantee of winning when it comes to Texas Hold ‘Em. The four betting chances give your opponents the chance to potentially bully you through large, ever increasing bets, vice versa, it allows you to do the same.

Therefore the key to Texas Hold ‘Em is interpreting the community cards and working out the possible combinations that they could offer to your opponents. If you can do this relatively successfully, you will be able to see through bullying and bluffing tactics and ultimately win more hands than you lose.

A good understanding of basic human psychology is almost as necessary as a solid knowledge of poker hands and cards. That after all, is what makes the game so fun to play and watch.