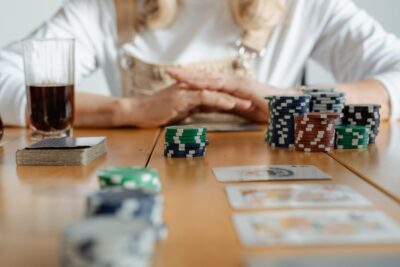 What is Angle Shooting in Poker?

Simply put, an angle shoot is where a player tries to get an unfair advantage at the table. Angle shooting is not technically cheating but it is unethical and frowned upon by most players.

There are numerous ways to angle shoot opponents, all of which will irritate your opponents and likely to make you a target the table. With cardrooms reopening and live poker booming during the WSOP, angle shooting is something to be aware of.

Poker etiquette and ethics are a big deal in the poker world. In this post we’re going to share the most common forms of angle shoot poker so you can notice them, avoid doing them and flag them to the cardroom manager or online poker site.

This type of angle shooting is one I’ve seen the most in live games. A player will perform a motion like they are about to fold then reconsider. They will do this to gauge a reaction from their opponent. The fake fold helps determine whether the other player is happy or not or perhaps about to muck their own cards (causing them to lose the pot). It is a dirty move and one that you may see experienced players employ from time to time.

This angle shoot is a tricky one as I’ve seen inexperienced players make this mistake without it being an angle shoot. By putting the bigger denominations at the back other players can’t see their true stack size. Some players do that deliberately, fooling other players into thinking they have less than they do.

This trick is very uncool as a player could have a monster hand and be waiting for their opponent to raise them all in only to realise that they are up against a deeper stack. To remove any doubt, we recommend you always have your higher value chips at the front of your stack, clearly visible to the table.

Acting Out of Turn

This angle shoot is impossible online thankfully but quite common in live games. It is where a player acts out of turn e.g. betting before it’s their turn to act. It’s highly unethical to do this as it creates confusion amongst the other players and makes them think you are strong.

Again, this is something I’ve noticed beginners do too and not to gain any advantage. If you are ever in this situation and involved, just ask the dealer what the ruling as this angle shoot is can sometimes restrict the players ability to bet later in the hand. For instance, they may only be able to check, call or fold and no longer bet.

Due to the less personal aspects of online poker, there are less cases of angle shooting. However, there it is still possible. I’ve found players abusing the chat function in ways which could be considered angle shooting. For example, they may provoke opponents, declare their hand, tell them they are going all in etc.  Any chat like this could be managed easily in a live game but is impossible online due to their being no manager or physical dealer present.

We recommend ignoring any text you read online. In fact, some sites let you remove the chat function altogether, so you won’t see it, not a bad idea. You can find limitless information on poker sites UK on these kinds of features if you read the reviews.

One of the oldest angle shoots in online poker is to fake disconnection. I really hate this as it hinders an opponent’s ability to bluff a player out of the pot. Some poker sites protect a player if they lose connection, letting them get to showdown even if they haven’t called a bet. So, a player may get to the river, facing a big bet and abuse the disconnection protection feature to get to showdown, not having to call the bet.

Our Conclusion on the Angle Shoot

By now you should see how we view the angle shoot in poker. Texas Hold’em Questions are committed to helping players improve their technical skills to win, not cheat. Whilst angle shooting may not be actual “cheating” it is certainly unethical and can ruin the experience for others.

We want players to enjoy poker so if you ever encounter angle shooting opponents, warn them, tell the dealer, and don’t sit quietly. Since angle shooting is not actual cheating, the managers won’t necessarily impose penalties on players who do it. So, it’s up to the other players at the table to voice up and not stand for this behaviour. This is no reason to fear live poker as angle shooting is fairly uncommon.

To end on a fun note, there is little better than seeing an angle shooter get burnt. Check out an entertaining example of this in the video below.