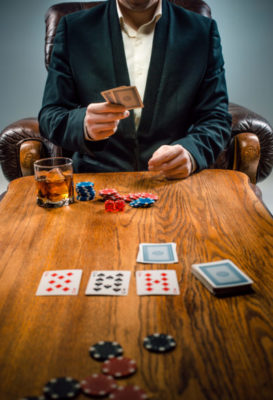 The Most Popular Form of Poker

Like it or not, but Texas Hold’em holds its status of being the most popular form of Poker for decades. Any Poker enthusiasts will find a suitable room with a legendary Texas Hold’em in virtually any online casino. Even though dozens of other game rules of Poker exist, such as Omaha, Omaha Hi-Lo, 3-Card Poker, and Pai Gow, Texas Hold’em stands out the most. This variation is the most popular poker game for a reason. If you have always been wondering what makes this game variation so recognisable, this article well educate why. We will look at the most compelling arguments why Texas Hold’em isn’t going anywhere anytime soon.

We won’t explain the game rules of Texas Hold’em since it is the easiest and the most accessible variation of poker, even for newcomers. Yet, you might have an interest in finding out how it originated in the United States and worldwide. Considering the name, Texas was the place where poker enthusiasts of the early 1900s were experimenting with the game rules. According to historiographic sources, the first-ever documented games took place in Robstown, Texas, in the early 1900s.

Even though this game originated in Texas, it was soon becoming more popular in the 1960s in Las Vegas. This variation became a big part of the poker scene amid the gambling boom in Las Vegas. For active gamblers of that time, having a session of Texas Hold’em in the Golden Nugget casino was a usual endeavour. Now you know the origins of this game, let’s analyse the main reasons that made Texas Hold’em so popular globally.

Unlike dozens of other Poker variations, Texas Hold’em is a game that makes it easy for newcomers to enjoy. Its set of game rules are simple, and the fundamentals of dealing cards, forming combinations, and winning is convenient too. Thanks to the ease of starting a Texas Hold’em session, it has gained the status of being a game that is “easy to start, hard to master.”

In addition to being easy for for newcomers, the game has intuitive game rules. There are clearly outlined scenarios of what to do in each specific game situation. Those who have some experience with playing professional poker will also consider a range of mathematical factors. For instance, Texas Hold’em has a total of 169 starting hand combinations. Compare that with Omaha Hi-Lo that features more than 16,000 various starting hand combinations. Sounds simpler and transparent, don’t you think?

Thanks to the relative ease of playing Texas Hold’em, broadcasting this game variation is straightforward. In comparison, try imagining a TV broadcast of Omaha Hi-Lo, 3-card Poker, or Razz. These game variations, due to their more complex and complicated strategy rules, have game nuances that are problematic to explain to the viewers. Have you have ever watched poker broadcast on TV or on the Web? You’d remember that the screen compiles all necessary details concurrently. Since only two hole cards are dealt in Texas Hold’em, the audience can easily understand what is going on on the screen. In recent years, streaming poker on specialised services, such as Twitch or YouTube, has also become popular. It’s easy to understand why broadcasting and streaming of Texas Hold’em is the number one choice.

Other notable reasons that made media attention and broadcasting of this game variation so popular is a dazzling array of tournaments. Those enthusiasts watching Texas Hold’em on TV can take a look at WSOP, WPT, EPT, and other leagues. The same goes for amateurs who are looking for new online casinos NZ . It might be a bit tough to find a top- notch casino with dozens of tournaments for players, alongside having a low minimum deposit. For your convenience, you should read respective reviews of those new online gambling sites. Once you made your mind up, make a small deposit and join a Texas Hold’em tournament, just like the pros on TV!

It is no surprise that thousands of individuals who have never tried playing table games associate Texas Hold’em with poker itself. In other words, people don’t even know that other game variations exist. Consider tracking tournaments and leagues dedicated to other rules of poker. Even though dozens of tournaments dedicated to game rules exist, you will struggle to find the same prize pools as in Texas Hold’em leagues.

One of the most representative features that made Texas Hold’em popular once and forever was the triumph of Chris Moneymaker at the 2003 WSOP Main Event. Chris managed to win approximately $2.5 million in prize money , eventually making it a great driver for the popularisation of Poker. Other new players who managed to win WSOP and other titles only cemented the brand of Texas Hold’em as the most popular poker game.

The trend for becoming a pro player is associated with Texas Hold’em even now. Even for casual players that tend to make for living with poker, sticking to this game variation is wise. You’ll have plenty of tournaments to choose from, whereas the list of available leagues for amateurs will exceed your expectations.

Keeping in mind that Texas Hold’em is still the most popular poker variation. Even now, the mentioned reasons represent why this game became so widespread. The best thing about Texas Hold’em is that it is easy to learn, making it accessible for all online poker ​newcomers. In addition to easy rules and intuitive design, it is the game most suitable for TV broadcasting and live streaming. The final argument is that Texas Hold’em has become a brand that is associated poker, as a whole. These three reasons makes Texas Hold’em a game that won’t go anywhere for years to come and is the number one game to play.